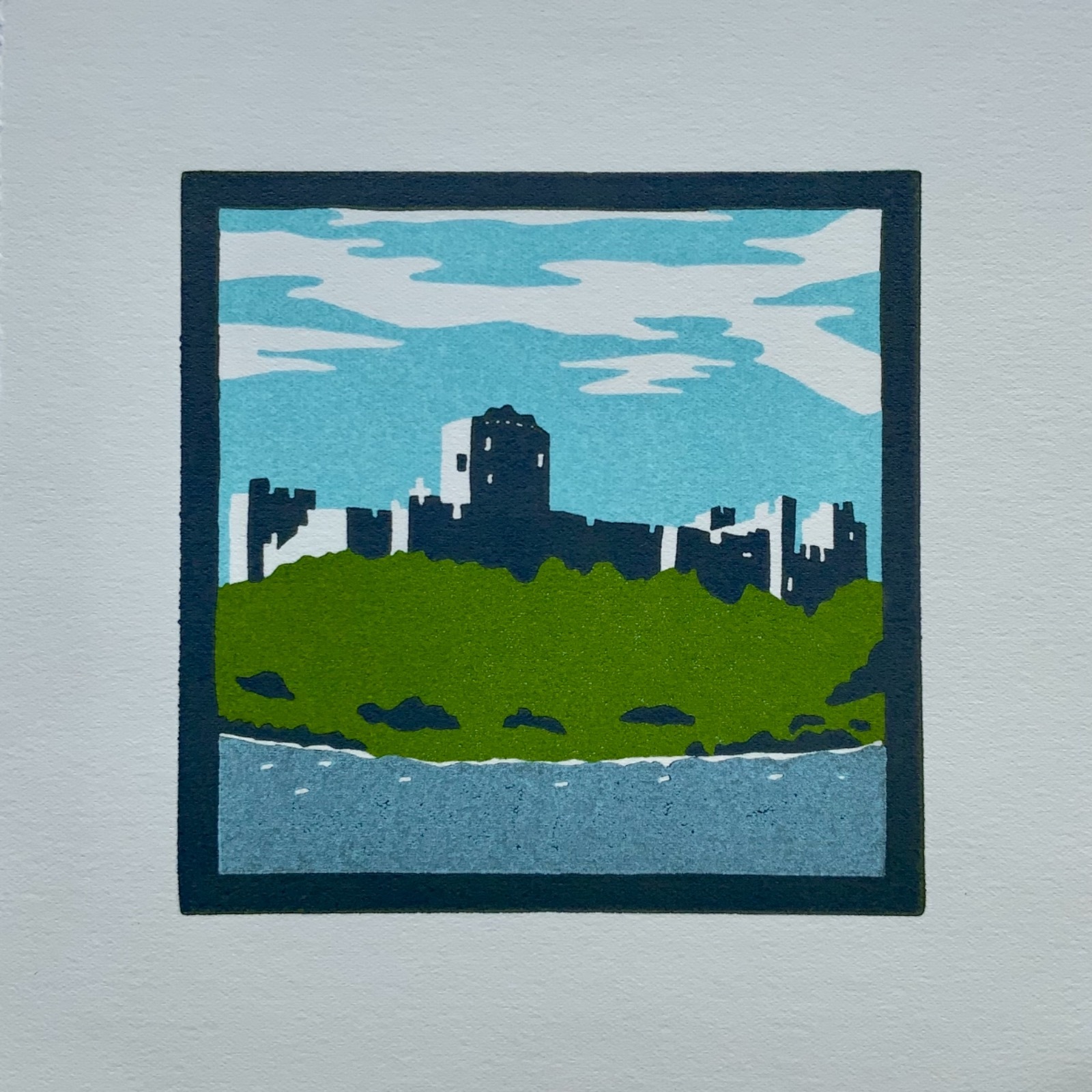 The majestic ruins of Pembroke castle are seen here across the tidal pill.

This is part of a series of prints of castles. If you would like me to add your local (or favourite) castle to the series then please let me know.

I am a printmaker creating original works, mainly using the technique of reduction linoleum relief printing. I also produce occasional prints using other relief and intaglio methods. My studio is situated in Llanwrtyd Wells - home to the quirky sport of Bog Snorkelling and the 'Man vs Horse' marathon – which sits amidst the beauty of mid-Wales.

I am a member of the Aberystwyth Printmakers group.

A long-held interest in archaeology means that I am particularly drawn to buildings and structures in their landscape settings. I am also fascinated by the concept of liminality; by boundaries, thresholds and transitional spaces.

The starting point for a print is usually one of my own photographs. Using a variety of manual and automatic processes, together with compositional sketches, I abstract and manipulate them to achieve a working image which is then transferred to the lino by drawing or tracing. Whilst this may sound like a planned and rigid process it is actually remarkably fluid in nature and frequently benefits from unintended effects.

I was initially attracted by its graphic feel and the technical nature of the processes involved. Whilst this technicality might seem at odds with creativity, I have found that the medium offers almost infinite scope for artistic expression. I particularly relish the intellectual, technical and artistic challenges involved in the creation of an image by the repeated transfer of layers of ink onto paper via the medium of carved linoleum. There is often an element of serendipity in the process which adds an extra element of enjoyment and discovery to the process.

My earliest prints were stark, with detailed cutting and no tonal mark-making. All elements of the image were abstracted so that they were essentially binary – they were either black or white, 1 or 0. A degree of simplification and abstraction is present in the majority of my work. Partly this is due to the nature of the relief printmaking process, but probably owes more to my artistic influences. These are mainly mid-20th century graphic and commercial art – such as travel posters, advertising and book illustration. A feature of many of these works is the reduction of subjects to simpler forms through the elimination of detail – often to an extreme degree. My current work has a brighter, looser style with a greater use of colour. It is also characterised by a much wider variety of styles.

In attempting to portray locations in print I have come to the conclusion that my perception of a given location is not comprised of a single view but encompasses a number of views that form, for me, the sense of place. This is starting to influence my practice and it is likely that my future work will proceed in this direction, attempting to represent these multifaceted memories through what could be called ‘collected’ landscapes.

Hurry, only 3 left
Minimum Quantity to buy is 1